Gemini is a very old constellation, representing the two twins Castor and Pollux who belonged to the Argonauts. Even though they were both sons of Leda (the daughter ot Aetolian king Thestius), they had different fathers: Castor was the offspring of Spartan king Tyndareus. Pollux on the other hand was the son of Zeus, the king of gods in ancient Greece.

Castor and Pollux have been regarded as the patrons and protectors of sailors, revealing themselves in St. Elmo's fire. St. Elmo's fire is an electric phenomenon that leads to a bright glow in the rigging of sailing ships.

In Gemini, the sun reaches its northern-most position and hence its highest point in the sky in northern countries. Around December 14, the meteor shower of the Geminides can be observed, with around 60 shooting stars that appear to be emerging from Gemini.
This constellation belongs to the zodiac. Its time of the year is between May 22 and June 21. This constellation does not belong to the zodiac. It's brightest star is Pollux (β Geminorum).
Neighboring constellations are Taurus, Orion, Monoceros, Canis Minor, Cancer, Lynx, and Auriga. Have a look at our full list of all constellations.
Return to selected star. 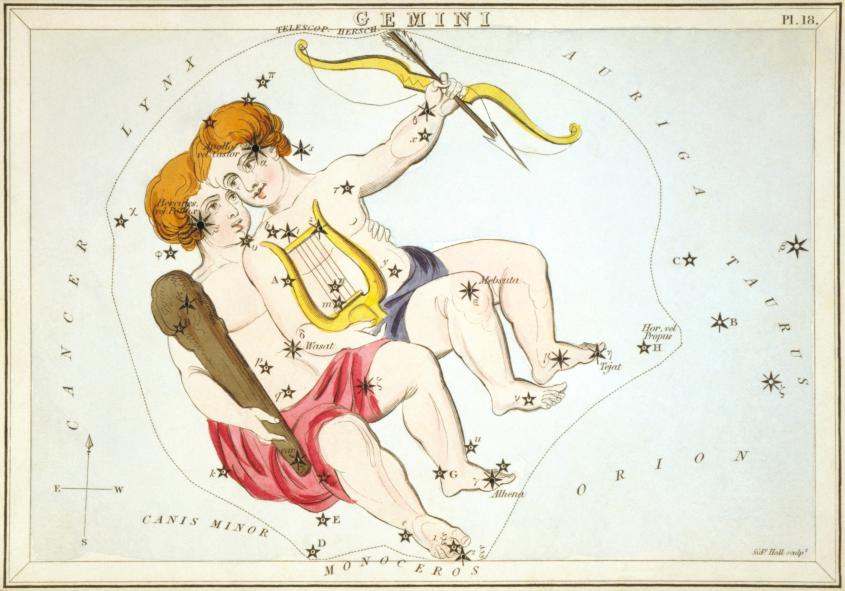 Historic depiction of the Twins.

A few stars named in Twins

A few free stars in Twins