The constellation Pxyis was introduced by Nicolas-Louis de Lacaille in the 18th century. It represents the mariner's compass, as opposed to the constellation Compasses, which represents the draftman's compasses. It is a rather small and faint constellation, located in the southern hemisphere.The pane of the Milky Way goes right through it, and it is home to a couple of notable deep-sky objects, such as NGC 2818, one of the few planetary nebulas located in an open star cluster.

Pyxis is also home to three stars with confirmed planetary systems, such as HD 73256 b, a "hot Jupiter" that orbits the star HIP42214 every 2.55 days. Certainly, life as we know it from Earth will not be able to exist on such a hot gas planet.
This constellation belongs to the zodiac. Its time of the year is between and . This constellation does not belong to the zodiac. It's brightest star is (not in database).
Neighboring constellations are Puppis, Vela, Antila, and Hydra. Have a look at our full list of all constellations.
Return to selected star. 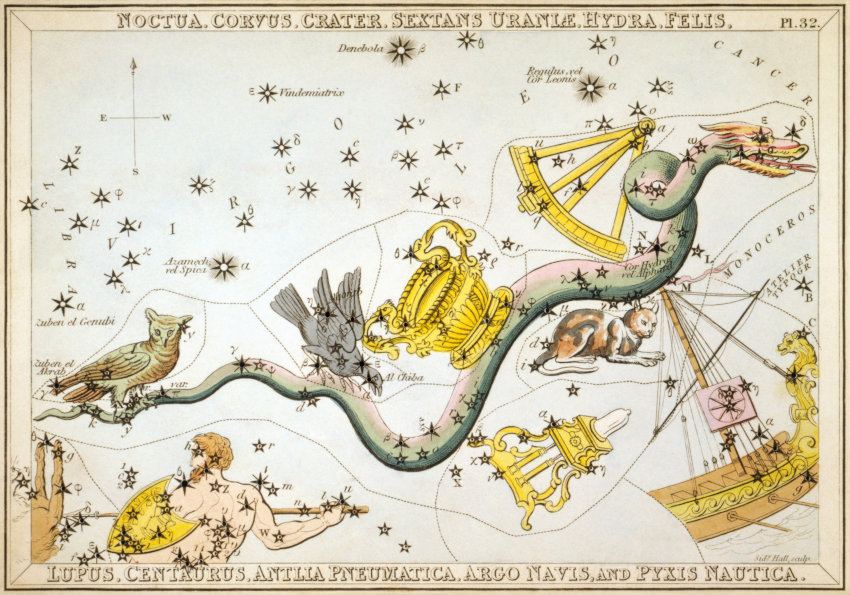 Historic illustration of the ancient constellation Argo Navis. Pyxis can be seen overlying the mast of Argo Navis.

A few stars named in Compass

A few free stars in Compass