Polaris (α Ursae Minoris) is a yellow white star (F7:Ib-IIv SB) in the constellation of Little Bear.
Polaris, also known as the Pole Star or North Star, is the main star in the constellation Little Bear. It is very close to the northern celestial pole, hence its name. Visually, Polaris is a double star, with the much fainter companion being visible only in telescopes. It was discovered in 1780 by William Herschel, a British-German astronomer, musician, and composer. The main star is a double star itself, but it took until the year 2006 when it could be resolved into two components using the Hubble Space Telescope.

Polaris is one of the most important stars in the night sky, at least on the northern half of our planet, since Polaris makes it easy to determine North and the latitude of one's position on Earth. For centuries sailors have relied on Polaris to determine their position on the ocean. Only since the introduction of GPS this has become less important, but it is still a popular exercise for people who want to get along without electrical aides.

The magnitude (brightness) is measured on a logarithmic scale. Small numbers mean bright stars: A star with a brightness of 1 mag is 100 times brighter that an star with 6 mag.
Magnitude
1.98 mag
The distance is measured in light years (LY). A light year is the distance, that light travels within one year. 1 LJ is equal to about 5,878,630,000,000 miles.
Distance
431.4431.4 ly

If you own the NFT you can write a dedication for this object, download a certificate.
The original buyer of the NFT will ralso eceive a framed print (16x12 in or 10x8 in).
Star trail picture of the celestial north pole, with Polaris being the brightest star close to the circle center. 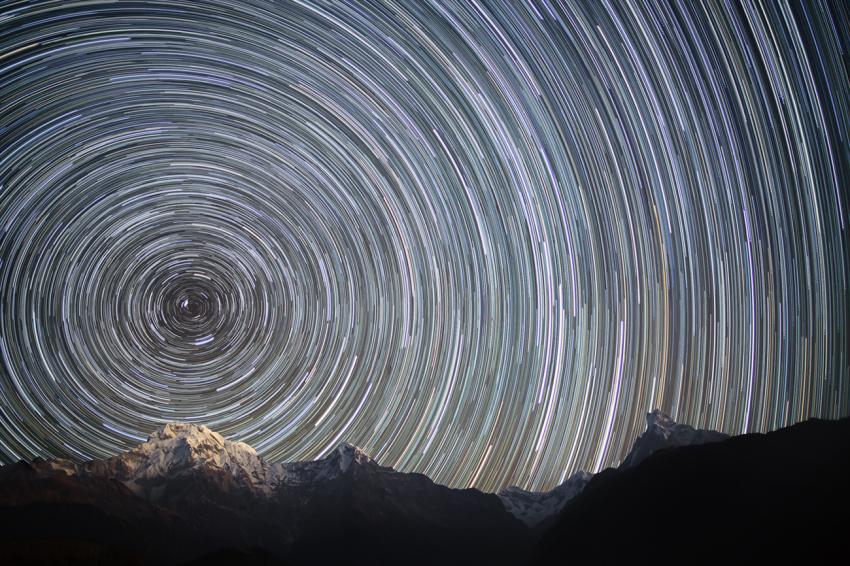 Image credit: Anton Yankovyi
License: creative commons (cc) Attribution-ShareAlike 4.0 International (CC BY-SA 4.0)
Disclaimer
While we take great care in compiling the data of all astronomical objects in our database, errors can never be ruled out completely. Therefore, no warranty is taken over for the correctness of the data, the descriptions, or the associated images. Staracle cannot be held liable for any damage, direct or indirect, that may result from incorrect data.
Click on a circled star ...
Use the scroll wheel of your mouse ...